Opening of the Ball in Central Kentucky 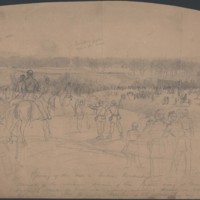 Opening of the Ball in Central Kentucky

Recto: "Arrival of the advance division of General Buell's army at Green river bridge & attack by 4000 rebel infantry, artillery, & cavalry on 200 of Col. Willich's 32nd Indiana. Repulse of the rebels / Turn over / [illegible] artillery -- rebel / Principal [sic] fight behind the woods."
Verso: "About One O'Clock of Tuesday Dec. 17th a regiment of mounted Texas Rangers, 2 reg'ts of infantry & a battery of artillery attacked the picket Guard on south side of Green river consisting of 200 men of Col. Willich's 32nd Ind. Reg. & after a very sharp little action, the rebels retreated precipitately leaving a number of their dead & wounded in the field. This fight though slight and indecisive is important as being the first of the ground campaign in Kentucky destined to effect such important results. The heights on this side the river were crowded with Generals & their staffs as well as subordinate officers of every grade & privates & envious & excited spectators."