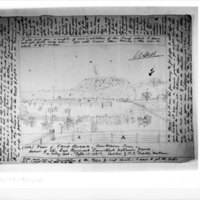 Recto: "View of Camp Russell, New Haven, Conn. Review of the 2nd Regiment, Connecticut National Guard on Friday last. Sept. 15, 1865. Sketched by H.C. Curtis, New Haven. // Mr. David B. Gulick -- I herewith send you (don't this sound like Gleason?) a sketch of Camp Russell at the time of the Review on Friday, Sept. 15th. References = a is the stony part of East Rock, cut it rather facsimile = b is small stones and rocks that have slid off the rock = c is light shrubbery growing on the "Rock" on the sides and top-light bushes not trees = d is trees thick and profuse = e is lots and gardens = f is the lines of tents = g is the colonel's tent = h is the dining tent = i is the Artillery, 4 guns with their caissons, muzzels point towards the rock -- make that conspicuous = j is the Reg. band = k is the crowd of people = l is the colonel himself in groups of people. // I would suggest that you take the line of the crowd the whole length of the view and bring it about 1/2 an inch lower, giving mere appearance of camp ground. That would bring the top of the picture to the red line drawn across the top. It is not essential to put in all the fence in the foreground. I would cut it off, say about where I have put a red line, or perhaps the fence at the bottom marked A, would give character to the thing, but it was too far away for people to sit upon it and besides it was in a man's garden, you might make the foreground to embrace all between the upper line of the crowd and the red line -- and if you do stretch the width a little and -- use your own superior judgment (ahem!) about it -- all the boys are anxious to see the thing in print -- and I have promised them it shall appear next week. // I will send you a couple of comic sketches of the camp which I have not yet quite ready now. You will receive them Monday -- They will be about 4 by 5 inches. Will send you a description of the thing by next mail. I want to get the best. P.S. I forgot to say n is "sky" // [numerals a-n on drawing]."
Verso: "H.C. Curtis."