The Battle of Hatcher Creek: The Fight on Thurs 27 64 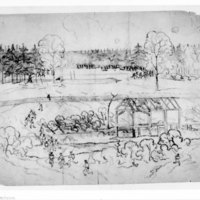 The Battle of Hatcher Creek: The Fight on Thurs 27 64

Recto: "7 x 9 3/8".
Verso: "The Battle of Hatchie [sic] Creek // The Fight on Thurs 27 64 // Hancocks 2nd Corps flanking the rebel works at Armstrong's Mill on the Hatchie [sic] Creek." Newspaper clipping: "General Grant's Late Movement // New York Nov 2 - The importance of Gen Grants last movement it appears, has not been clearly demonstrated in the published accounts. The Tribune's correspondent on the extreme left says the new angle of a mile and half west, and a mile and a half southwest, acquired on our left by the recent strategic demonstration, is being strongly fortified. I understand that the army line of the railroad is to be immediately pushed out to the left two or three miles beyond the present terminus. The way this important extension of our fortified line was so easily and cheaply made, was by the enemy weakening his lines to intercept what he took to be a flank movement around their extreme right, while massing against the 2d and 5th Corps on the extreme left, which the 9th Corps shared in at front and took the line of their works which was reversed and now forms our new left angle. Probably note during the war has so important an extension of fortified line been made with so little fighting. True, it took considerable marching and counter-marching, but the men engaged in it turned it into a frolic after their long confinement."

Poor; ripping along vertical crease; damage at all corners; pin marks at upper left corner, where newspaper clipping was attached..