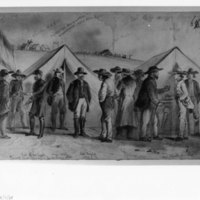 Recto: "Cold drizzly morning // 6 x 9 1/2 // Corps flag // Sheridan HdQt // night HdQtr designation Red & Blue light // Reb Prisoners // Capt. Cherington Provost // Major Stephen Inspection Gen // Capt. Douglass Chief C.S. // 'Dunkards'."
Verso: "[very faint] "I'm as a wanderer & they took me in // A scene at Gen. Crooks Hd'Qts Oct. 2nd 1864 - at Harrisonburg- // This Hegira of the Loyal Dunkards, a non-combatant Sect similar to the Quakers, - the scene represents them at gen Crooks HdQts - procuring passes and making arrangements to migrate to the Land of Milk and Honey - I wish you would have a little extra attention paid to the three officers by the engraver - they are life sketches - these gentlemen took me in Mr. Leslie. I showed them your Letter & they expect this little return for their liberality - They hold prominent positions - Major Stephen's is inspection General for Crook's Corps. Cap. Cherington is Provost Marshall Gen ditto. Cap. Douglass commissary subsistence ditto. About one hundred families have gone North with a return supply train - Many more will do so soon - it is a decided Illustration that all cannot be Reb sympathizers as such I think would remain instead of leaving house & home (some of their houses are fine ones) to be plundered and destroyed by both armies - This picture seemed to please Gen Crook very much - He is a noble man, modest & retiring = is loved by all who know him - he has acquired a lasting fame through his masterly operations [sic] in the late campaign & I think deserves considerable notice // [signed] Taylor."