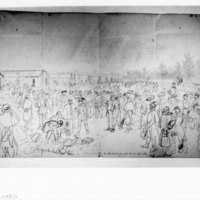 Recto: "Knapsacks, cartridge boxes // All marked thus X -- Secesh Uniform when found light color. Turn over."
Verso: "I sketched this scene shortly after the formal surrender of the rebels at the extensive barracks about a mile back of 'Fort Huger' which is situated at Weir's Point, the extreme north point of the island. Parties of prisoners were continually being brought in and disposed of. Some few of them wore the air of martyrs in a just cause, but the majority appeared to consider their change of condition as a happy relase from sufferings & privations 'past, present, & future'. I had intended to write a detailed account of the surrender, but my time has been so completely occupied in keeping track of & sketching events, that it has been quite impossible. I refer you to the correspondence of the daily press, & for particulars of the second days business, to the Phila. Inquirer whose correspondent was my companion during most of the day, & whose opportunities for observing, were, I know better than were enjoyed by the others. [signed] FHS."