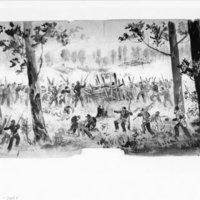 Recto: no text.
Verso: "Two miles west of Atlanta // July 29th 1864 // Yesterday at about halfpast 10 in the forenoon, a Lt. of the 15th Corp signal officer reported to Gen. Logan that a large mass of infantry were coming from Atlanta towards the south, very likely to flank us - we had just time enough to build rude breastworks with rails and sticks &c without a single shovelful of earth - It was about 12 o'clock - the enemy rushed with their habitual impetuosity & were repulsed. They made in that afternoon nine different charges! & nine times repulsed with great cost and the day was unusually hot - They had, by the request of a Lieut who deserted to our line, four Genls wounded, Brown, Stevenson, Loring & Gibson [...] of them mortally - their losses in killed alone is about 1000 - we [...] not over 100 persons. Our losses - In the 15th corps which alone bore the brunt of the rebels assaults - the losses in killed, wounded and missing [...] up to 537; in the 17th corps which was but very slightly engaged, the loss not above 20 - few prisoners were taken by the rebs // [signed] J.F.E. Hillen."

Bad loss of paper on lower and right margins; ripping on left and right corners .